Bamboo: A Substitute for Wood for Biofuel 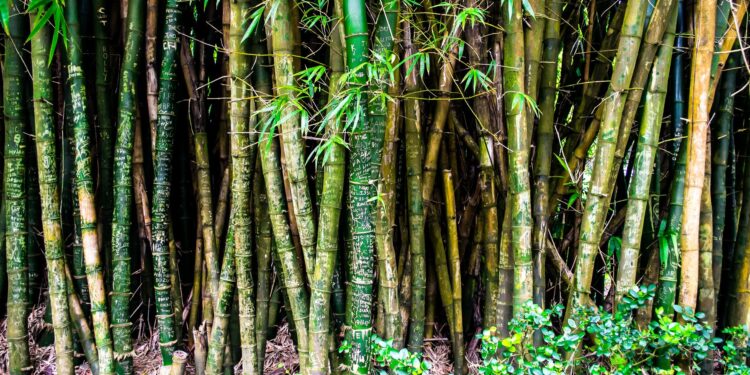 Once presented as a no-failure promise to cut carbon emissions and mitigate the effects of a changing climate, biofuels have come under attack over the years due to negative effects, such as increasing deforestation, promoting land degradation and diminishing biodiversity. However, private companies and research organizations around the world still have faith in biomass energy and recently, bamboo has caught their eye, as evidenced in a study made in Indonesia which we discuss, as it presents a future in sustainable energy.

Bamboo is one of the most productive and fastest growing plants on the planet. For example, the beema bamboo species is the fastest growing among the bamboos and may grow up to 1.2 meters a day. Bamboo, which according to the FAO occupies 36 million hectares worldwide, has many advantages over other trees in terms of sustainability and carbon sequestration. Its fuel characteristics, high productivity, short rotation and rapid growth makes bamboo even much more valuable: the International Bamboo and Rattan Organisation (INBAR) claims that a single bamboo pole is capable of providing enough power for a rural household for an entire month. Because of its energy yields and credibility as a viable source of bioenergy, bamboo power has been used extensively in India, China and Brazil.

Researchers from RMIT University and Center for International Forestry Research have partnered with Clean Power Indonesia (CPI) due to their increased curiosity into how bamboo works as a biofuel and how it may be more sustainable than traditional wood. Bamboo has great fuel characteristics: high heat values, volatile contents, lower ash and moisture content. Bamboo has proved itself as a great alternative to wood; removing bamboo normally doesn’t damage the environment nor its stock and its approach to carbon sequestration is much more effective than that of wood. Bamboo biomass can be processed through either thermal or biochemical conversion to produce different energy products, such as charcoal, pellets, and briquettes, which could substitute wood fuel products. And small islands of Indonesia are a testament to the effectiveness of the bamboo, as we’ll mention further on.

It’s true that burning wood is a better alternative to burning coal. Although wood burning is considered carbon neutral because it doesn’t release more CO2, and could provide a way of harnessing residues from forestry activities which would otherwise end up in landfill sites, in the long-run we may see an increase of deforestation for the sole reason of burning wood. And the process of adequately using wood for biofuel can be quite complex when compared to bamboo. According to Open University: “First, the wood has to be dried, then it undergoes pyrolysis to produce gases. The gases are then purified and burnt to generate electricity. The ash created during pyrolysis contains nutrients which potentially could provide a plant fertiliser, though it is possible the ash may contain contaminants from the soils in which the trees had originally been growing”

Through the processes of gasification, bamboo can create clean gas and actually leaves charcoal as a natural by-product. These two fuels are created simultaneously with the same process, becoming more cost-effective. Consequently, the bamboo charcoal can be used as a solid fuel the same as coal. Through the process of pyrolysis –the same used for wood– the liquid fuels can be processed in a biorefinery to produce biofuels. Combustion processes can also be used to produce heat and electricity. It doesn’t sound that different from wood at first, but it’s because the conversion of bamboo doesn’t stop with those three fuels. Through biochemical conversion, bamboo can be transformed to other types of biogas and biofuels. With biochemical conversion the sugar in the bamboo can be fermented and transformed into bioethanol and methane, making it more versatile than wood and other traditional biofuel sources.

The benefits of using bamboo don’t rest with their many ways of being used as biofuel: it’s joined by its inherent sustainability. As we have mentioned above, bamboo is a fast-growing species, but it can also grow and develop perfectly in degraded lands with minimal use of water or fertilizer, stabilizing soil, controlling soil erosion and retaining water in land. It’s because of this that it can provide a habitat for biodiversity and help agroforestry systems as a by-product of its harvest. In contrast to wood, bamboo doesn’t need to be cut down entirely to be used for biofuel: because it grows so fast, in about 5-12 years when it’s mature, it can be harvested and systematically thinned yearly, which could actually boost bamboo productivity in the long run. It’s the same easy and rapid growth which could ease the pressure on forests to provide bioenergy. If we quickly step aside from the environmental benefits and turn an eye towards the social impact, bamboo planting and harvesting for biofuel could also provide new income for rural families and boost the local economies.

According to the CPI, “more than 50 million people in rural communities in more than 50,000 villages and 4,000 islands live without access to reliable power in Indonesia”. Seeing the possible benefits of using different types of energy created by bamboo, the CPI joined the local government and started a pilot project in February 2021 in the Mentawai islands of Indonesia; a chain of islands and islets where more than 85,000 people live. Now that the pilot has concluded, the CPI shared their amazing results. They made it possible for 1,250 households to have access to reliable electricity throughout 3 different villages, each one with their own bamboo-based power plant, using the gasification method. As mentioned before, the sustainability of bamboo goes beyond the electricity it provides: around 450 jobs were created in the villages of Mentawai. Now with the newly implemented bamboos, agroforestry projects are flourishing and electricity is used for commercial and productive uses as well. After seeing the positive results, CPI has committed to expanding the project across all 43 villages of Mentawai over the next 5 years and hopefully, the rest of Indonesia. This could inspire change all over the world if proven successful and could have a major impact on all Indonesians alike: the small country is among the world’s top five largest emitters of GHGs.

However, just like anything else, bamboo for biofuel has its downsides that need to be fully tackled in order for this biomass to be used more commonly around the world without posing any other threats to the environment nor to human life. First thing to notice is that bamboo can be a ruthless plant. The plantations need careful management, otherwise they can take advantage of their invasive nature and disrupt surrounding vegetation. This is also why it is recommended and preferred to grow bamboo in under-utilized or degraded land: so it doesn’t become intrusive enough to interrupt with food crops or biodiversity. However, management doesn’t represent a difficult hindrance; bamboos have been used in agroforestry systems worldwide for years and is a favorite among farmers.

The use of bamboo for biofuel has been put into practice successfully in several countries, besides Indonesia, such as Ghana, Ethiopia and Colombia. But, with more and more research and fine-tuning of details, we can hope that bamboo will be used worldwide as we see a decrease in fossil fuels and other harmful practices.