Taking Another Look at Torrefaction

No one can argue that it has taken longer than expected for the wood-based torrefaction industry to develop, but it is widely acknowledged that torrefied wood pellets (TWP) have physical characteristics superior to white wood pellets (WWP), including higher energy density, higher bulk density, improved grindability and water resistance.  It has generally been assumed that TWP cost more than WWP, but analysis shows TWP can reduce the cost-of-use for end users (power plants), provide higher profits for pellet manufacturers, and reduce the overall carbon footprint of the biofuel.

Lignocellulosic biomass is comprised of mostly cellulose, hemicellulose and lignin.  Torrefaction is a mild pyrolysis process performed at temperatures between 220 and 300 degrees Celsius. During torrefaction, most of the hemicellulose is volatilized, creating torrefaction gas. This gas is comprised of relatively low molecular-weight, condensable organic chemicals; noncondensable gases (carbon monoxide and carbon dioxide) and water. The organic chemicals include acetic acid, methanol, lactic acid, formic acid, furfural and hydroxyacetone.

The difficulty of handling these concentrated, volatile gases has resulted in serious problems with both safety and operational sustainability for torrefaction developers.  Fires and explosions have occurred, pyrolysis oils have leaked from ductwork and fittings, and plugged lines have frequently interrupted the process. To remedy these issues, torrefaction must be undertaken in an inert environment. The use of large volumes of inert gas allows for safe operations and significantly reduces the possibility of the formation of pyrolysis oils and plugged lines. Operationally, the inert gas is used to transfer thermal energy into the reactor, dilute the torrefaction gas as it is being generated, and carry the organic chemicals contained in the torrefaction gas out of the reactor, in very dilute concentration, for immediate oxidation.  The inert gas is also used to safely cool the torrefied biomass as it exits the reactor and to recover its energy.

This solution requires large volumes of inert gas.  So where does this inert gas come from?   Previous technological approaches had no built-in mechanism for providing inert gas, as purchasing it or installing equipment to produce it is cost prohibitive.  However, catalytic oxidation technology can be employed to produce the necessary inert gas as a natural, and essentially free, byproduct of the overall process. This is key to commercial torrefaction.

The following conclusions, drawn from a more detailed analysis available upon request, includes a comparison of a WWP plant and a TWP plant producing the same amount of energy.  Assumptions used in the calculations are as show in Figure 1.

Energy in Biomass During Torrefaction
Biomass heat content, or high heating value (HHV), may be measured at input and at each step in the process. Torrefaction processing steps typically include grinding, drying, torrefaction, cooling, further grinding and densification. During each step, other than torrefaction, there is little to no change in the HHV. But during torrefaction, the HHV is changed. With the volatilization of the hemicellulose, organic chemicals are created. These chemicals, as described earlier, contain a disproportionally high level of oxygen, and as they are removed as a part of the torrefaction gas, there is a dramatic improvement in the molecular ratio of carbon, hydrogen, and oxygen in the remaining solids. The overall effect of this transformation is to concentrate approximately 90% of the initial biomass heat content in the remaining solids. These changes can be seen in the ultimate analysis results for the biomass feedstock, torrefaction gas, and torrefied solids.

The HHV of the biomass is mostly associated with its carbon content. Torrefaction results in a higher concentration of carbon in the torrefied biomass—in this analysis, approximately 9 percent increase compared to raw wood feedstock (49.25% to 58.01%). During the process, the feedstock’s HHV heat content is transformed into three unequal portions.  First, the torrefaction reaction releases a portion of the heat content into the reactor environment. Secondly, the torrefaction gas itself contains a relatively small portion of the biomass’s HHV.  Although a poor quality fuel, cumulatively, this stream contains a significant amount of energy, and its beneficial use in the process is key to commercially viable torrefaction. Third, the torrefied solids contain the balance of the initial heat content.

Figure 2 illustrates what happens to the HHV  during torrefaction. As demonstrated, the biomass feedstock has a total HHV heat content of 340.54 gigajoule per hour (GJ/hr). The torrefaction reaction generates 2.72 GJ/hr. of heat, and the torrefaction gas contains 32.87 GJ/hr of chemical energy. The remaining energy, 304.94 GJ/hr, is concentrated into the 12,757 kg/hr of torrefied solids with a heat content of 23.9 MJ/kg. 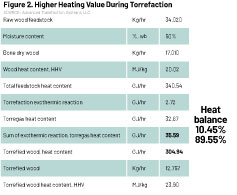 Adequately cooling the torrefied solids is a safety issue. Recovering the thermal energy during the cooling process is an economic issue, and a distinct advantage.  The torrefaction system generates 63% more thermal energy than is needed in the process itself.  This excess heat can be used to provide almost 50% of the energy required for drying a feedstock containing 50% moisture.

Another safety issue is that the torrefaction gas is highly flammable, but this concern can be addressed using inert gas.

Competitive with White Pellets
TWP can be produced and delivered to the customer at a lower cost than WWP  with efficient use of the energy contained in the torrefaction gas. Assumptions used for comparisons in Figures 3 and 4 include: feedstock at 50% moisture, $33/metric ton; combustion efficiency of biomass combustor for supplemental heat at 75 percent, equal relative power consumption and size of work force: and 8,000 annual operating hours. 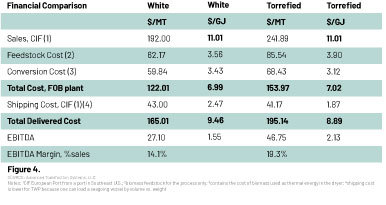 The use of inert gas throughout the torrefaction system plus the ability to beneficially use the energy from the torrefaction gas is paramount to torrefaction viability. For pellet producers, torrefaction provides a tremendous opportunity to improve financial performance while delivering a much higher quality product.  For end users, lower delivered cost, plus plant-level benefits resulting from a biofuel that is similar to coal, significantly reduce the product’s overall cost-of-use.  In addition, value is rightly placed on reducing the biofuel’s carbon footprint.  It’s time to move forward to create the next generation of solid biofuels. A more detailed technical version of this report is available.